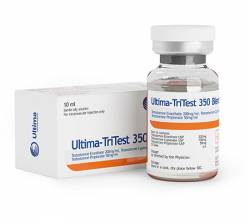 Ultima-TriTest 350 has a distinct androgenic effect which is coupled with a strong anabolic effect. Thus it is well suited to build up strength and mass. A rapid increase in body strength and an even increase in body weight occur. Athletes who use Ultima-TriTest 350 report a solid muscle growth since it results in less water retention and also aromatizes less than either Testosterone Enanthate or Cypionate. Indeed many bodybuilders who use testosterone and fight against distinct water retention and an elevated estrogen level prefer Ultima-TriTest 350 over other long-acting depot testosterones.

It is further noticed that Ultima-TriTest 350 is also effective when relatively low doses are given to well advanced athletes. It is interesting to note that when Sustanon is given to athletes who have already used this compound in the same or lower doses, it leads to similar good results as during the previous intake. Ultima-TriTest 350 is usually injected at least once a week., which can be stretched up to 10 days.

The dosage in bodybuilding and powerlifting ranges from 350 mg every 14 days up to 1000 mg or more per day. Since such high dosages are not recommended and fortunately are also not taken in most cases the rule is 350-1000 mg/week. A dosage of 500 mg/week is completely sufficient for most, and can often be reduced to 350 mg/week by combining with an oral steroid. Ultima-TriTest 350 is well tolerated as a basic steroid during treatment which stimulates the regeneration, gives the athlete a sufficient "kick" for intense training units, and next to the already mentioned advantage rapid strength increase and solid muscle gain distinguishes itself also by its compatibility.

In order to gain mass fast Ultima-TriTest 350  is often combined with Deca Durabolin, Dianabol or Androlic 50 while athletes who are more into quality prefer combining it with Parabolan, Winstrol, Anavar or Primobolan Depot. Although Ultima-TriTest 350 does not aromatize excessively when taken in a reasonable dosage many people, in addition, also take an antiestrogen such as Tamoxifen and/or Proviron to prevent possible estrogen-linked side effects. Since Ultima-TriTest 350 suppresses the endogenous testosterone production the intake of HCG and Clomid must be considered after six weeks or at the end of treatment.

Depot testosterones are not recommended for women, since the androgen level would strongly increase and virilizalion syniploins could result. Despile this; it is not uncommon for female competing athletes in the higher weight classes to take testosterone since it helps in remaining "competitive." Women who use "Testo" or who would like to try it should limit its use to either only testosterone propionate or inject a maximum of 250 mg Ultima-TriTest 350 every 10-14 days over a period of no longer than six weeks. At this point we would like to emphasize once more that steroid novices should stay away from all testosterone compounds since, at this time; they simply do not need them.

The side effects of Ultima-TriTest 350 are similar to those of testosterone enanthate only that they are usually less frequent and less severe. Depending on the predisposition and dosage, the user can experience the usual androgenic-liked side effects such as acne, aggressiveness, sexual overstimulation, oily skin, accelerated hair loss, and reduced production of the body's own hormones. Water retention and gynecomastia are usually within limits with the Ultima-TriTest 350 or are not as massive as with Enanthate and Cypionate. Liver damage is unlikely with Ultima-TriTest 350 however, in very high dosages, elevated liver values can occur which, after discontinuing use of the compound, usually go back to normal.