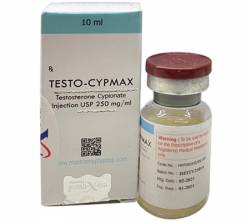 Please login to sign up for product Back in Stock email notifications.

Testo-Cypmax is an injectable steroid which contains 250 mg per ML of the hormone Testosterone Cypionate.

The Testosterone Cypionate ester of Testo-Cypmax makes its release into slow and therefore is requires injections to be less frequent than they would be if a bodybuilder using Propionate. Athletes using Testo-Cypmax often find that a twice weekly injection schedule, such as Monday/Thursday, is very sufficient for maintaining steady blood levels of the hormone.

Testo-Cypmax is the most common anabolic hormone that there is and is also considered the most basic. Due to this, bodybuilders often consider it the base steroid to most all cycles. Testo-Cypmax is both anabolic and androgenic in nature. Users of Testo-Cypmax will notice a dramatic gain in muscle size and strength, as well as an overall sense of well being and increases libido and sex drive.

Testo-Cypmax aromatizes very easily and therefore estrogen buildup and side effects can become an issue for users sensitive to these problems or those choosing to use a high dose of this compound. Therefore, when using Testo-Cypmax, bodybuilders often choose in incorporate an anti-estrogen such as Anastrozole, Proviron, Tamoxifen to help keep estrogen related side effects to a minimum. Extremely sensitive users, or users using very high doses (800-1200mg) might find that stronger anti-estrogens such as Letrozole or Exemestane are more suitable. Androgenic side effects such as oily skin are also possible while taking Testo-Cypmax.

Bodybuilders looking to bulk up, often stack Testo-Cypmax with other steroids such as Deca 250 and/or Boldenone 200, along with an oral compound such as  Methan or Oxy.

Testo-Cypmax use will quickly shut down the body's natural production of the hormone, thus making a proper PCT plan essential for restoring the body's natural function and maintaining gains as best as possible after use of the steroid has been discontinued. At cycle's end, bodybuilders often choose to use a combination of Clomid, Tamoxifen, and HCG for a period of 3-4wks in order to restore pituitary gland and testes operation quickly and effectively.

Woman bodybuilders often use Testo-Cypmax to build mass, although of course the dosage is significantly less than what males would use due to the possibility of masculizing side effects.

The male bodybuilder's dosage of Testo-Cypmax would typically be in 400-1200mg per week range and cycle duration would be from 8-20 weeks, depending of course on the goals of the athlete. Women typically see desirable results from doses of 50-100mg per week.