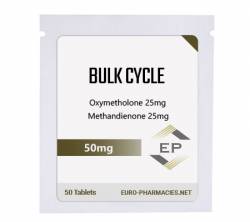 Please login to sign up for product Back in Stock email notifications.

Bulk Cycle is an oral steroid which contains:

Oxymetholone is a very good drug for promoting massive gains in both strength and size. This steroid is very anabolic and will promote an increase in red blood cell count and appetite. The steroid was originally designed as a form of treatment for patients suffering from diseases which cause the body to waste away, such as HIV.

A lot of bodybuilders consider this drug to be the strongest oral that there is for sheer mass gain. It is important to note that some of this mass will be from water bloat caused by the steroid. While Oxymetholone is a DHT derived compound and therefore can’t convert directly to estrogen, it still is known for many estrogenic related side effects. Some have speculated that Oxymetholone somehow triggers the body’s natural estrogen receptors into overdrive. Stronger anti-estrogens such as Letrozole and Exemestane have been shown to greatly suppress the body’s estrogen levels and can both be very effective in keeping these types of side effects to a minimum while using Oxymetholone.

Methandienone is an orally applicable steroid with a great effect on protein metabolism. Methandienone is a derivative of testosterone and has a very strong anabolic and androgenic properties. It has a great effect on protein metabolism and promotes protein synthesis. This effect manifests itself in by creating a positive nitrogen balance, supporting the build up of protein and, thus, skeletal muscle mass. Methandienone also induces an improved sense of well-being.

Methandienone is one of the most highly effective mass building steroids ever created. It was, in fact, created specifically for athletes to use to improve performance (although it was claimed to have therapeutic ability). It provides highly impressive weight and strength gains for most users. Experiencing a 3-4lb weight gain per week is not unheard of, especially in novices. It must be noted that a lot if this is water weight, and that with higher dosages gynecomastia, high blood pressure, and acne could occur. Methandienone when taken orally becomes active very rapidly, but only remains active for less than half a day. Often, for this reason, dosages were spread through the day.